In this post, we’ll show you how to convert your Python web application to mobile apps with MobiLoud Canvas in less than two weeks – and save yourself a lot of time and money in the process.

Python is a server-side programming language that allows you to create scripts, websites and web applications. It will help you deal with dynamic content, databases, and user functionality in your web app or website, but it won’t help you get native mobile apps built.

Python is designed to generate websites and web applications. Mobile application technology is very different. There’s no automatic way to translate what you’ve built with Python into native iOS or Android apps.

However, there are many ways to build an app for a Python web app, and we’ll group them together into two categories for the sake of brevity. We’ll look at them quickly, then explain why you should choose option #2.

The first choice is feasible, but complicated and time-consuming. Request an estimate from your team or an agency to see for yourself.

It will generally take a competent team months to complete a first version because everything must be rebuilt, and you can’t reuse any of your existing code.

Python is an excellent language for doing what it’s designed to do, but it isn’t particularly known for its adaptability – and it wasn’t built with mobile app development in mind. There wouldn’t be many people with the necessary abilities who would be willing to take on such a challenge.

The initial step is to build a simple iOS and Android app capable of doing the same tasks your web frontend is handling today.

If you manage to pull it off, you’ll have a lot of work ahead of you in terms of updating apps, keeping them up to date, and releasing new features and versions to catch up with changes in your web application.

In 90% or more of situations, this approach is simply not feasible. You’re not a computer science lab; you’re a business.

A more efficient and proven technique can help you go to market with strong iOS and Android applications within a reasonable budget and time frame.

This implies converting your Python web application into a hybrid app, rather than a native one.

Let’s look at hybrid apps in further detail, with a focus on why they are the best option for converting a Python web app to mobile applications.

Hybrid apps mix web and native components, with “webviews” used to display online content within a native “shell”. Consider it like a dedicated browser for your web app that can be installed on a phone or tablet, published to the App Store and Google Play, gets push notifications, and generally acts like any other mobile app. 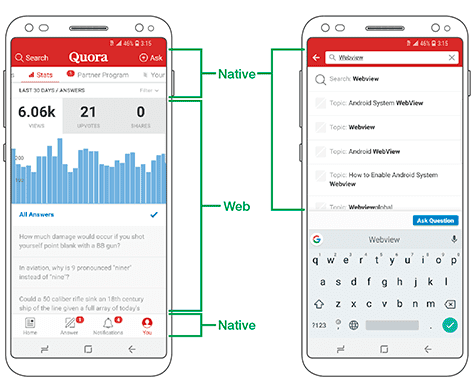 There are no features or UI to rebuild because your Python web app is housed inside a native “wrapper” on iOS and Android.

If you’re satisfied with applications that merely replicate the functionality of your web app, this is the way to go. The only reason you’d do it any other way is if you need features that are unavailable through the web and can only be obtained through the native SDKs. These days, a web app can achieve most things a native app can do.

Are hybrid apps any good?

A simple webview loading your site, on its own, is rather limited. It’s simply a native element, a “box” with your web app running inside, obvious to users, and almost certain to be rejected by Apple.

What’s more, it’s important to provide a robust user experience by including some essential native components on top of the webview (e.g. native navigation, push notifications).

Performance is one of the most frequently mentioned concerns about hybrid apps. However, they perform as well as their web counterparts.

The days of 2G internet have passed. Nowadays if your Python web application is fast and optimized for mobile, your hybrid mobile apps will be just as snappy and smooth when running in a native wrapper.

The effectiveness of the hybrid approach is demonstrated by the fact that many major technology companies and a plethora of small firms have successfully utilized hybrid apps in the past.

According to UX Matters: “We know that Facebook, Evernote, Instagram, LinkedIn, Uber, Slack, Twitter, Gmail, the Amazon Appstore, and many others are or have been WebView apps”

Given their stringent demands and technical talent available, it’s remarkable that all of these companies decided on the hybrid approach. 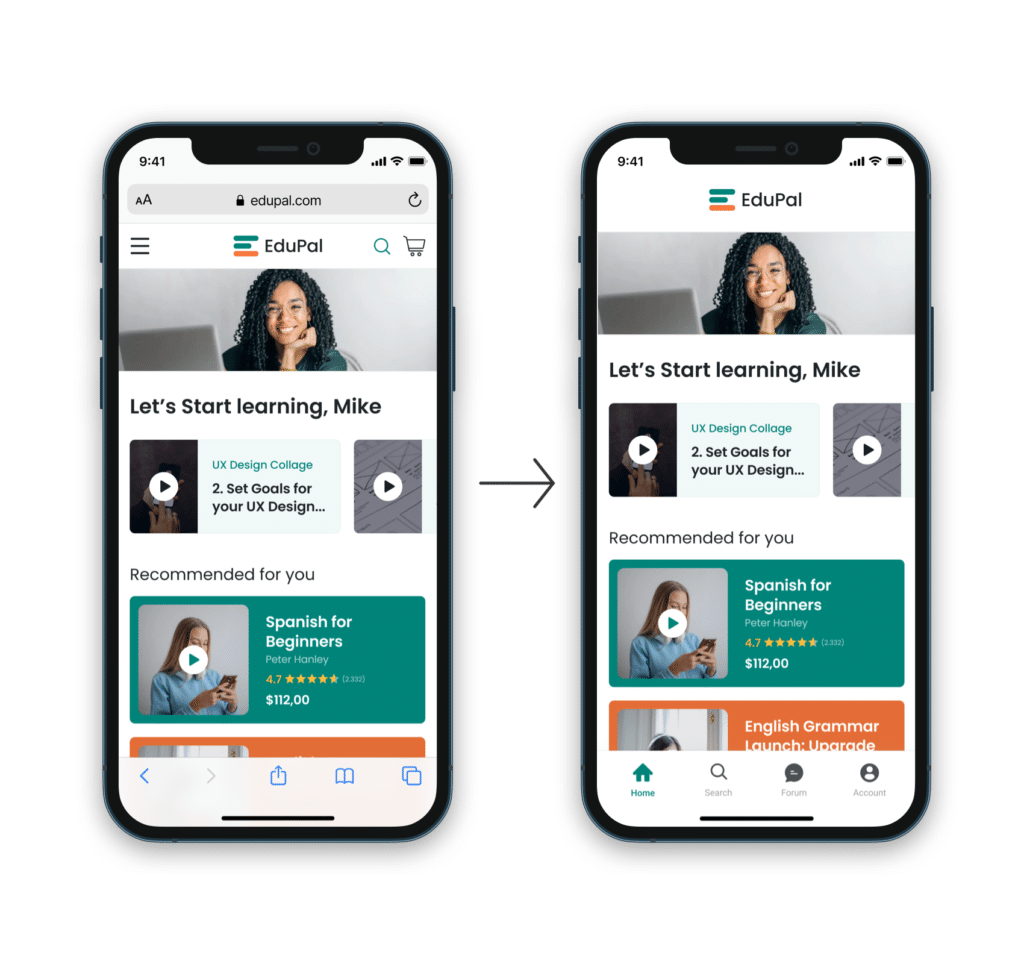 This is a great example of a hybrid app that has been properly implemented. From the user’s perspective, it’s like opening any native app with all of its bells and whistles.

Basecamp also went the hybrid route for their iOS and Android apps. Co-founder David Heinemeier Hansson wrote a great piece on his thought process for the project.

Hybrid development is orders of magnitude more productive than traditional native development, but that’s just one of the advantages.

Let’s look at some of the benefits of converting your Python web application to hybrid apps.

But even if you’re technically skilled, launching any new project can be difficult.

Creating a new app from the ground up is a tough job though.

All of the native components – those that are distinct from your web application e.g. a native navigation menu – must be developed from scratch, and everything must be thoroughly tested and optimized.

When you’re done, make sure the app runs properly on iOS and Android, that the user interface is up to snuff, and that it will be accepted by Apple and Google. There will be bugs to resolve during development and after release.

With just a few weeks’ time and no hassle, MobiLoud Canvas can take you from web app to a mobile app on the stores.

Canvas was created to provide established businesses a quick and painless method to get their app on the App Store and Google Play.

Unlike many other hybrid app platforms, Canvas is not designed for developers alone, it’s for companies that just want things done efficiently without worrying about technicalities.

However, if you do want to tinker, Canvas has a configuration and code editor that may be used to modify the apps to your liking. We’ve designed Canvas to be easy for non-technical entrepreneurs to use while still being flexible enough to be expanded upon by expert users.

Canvas has been used in more than 1,000 applications and has been downloaded by millions of people all around the world. Whatever your Python application does now on the web, it can also do on a mobile device with a Canvas mobile app.

How does Canvas work? In a nutshell, Canvas converts your current web app into hybrid mobile apps for iOS and Android, adds all the necessary native app UI elements, and combines everything with a service that manages the difficult aspects of getting an app published, and provides ongoing maintenance of your applications.

Our proprietary platform is based on webviews and allows us to create hybrid apps – ones that have both native and web components.

When you convert your Python web application to Canvas-based mobile apps, you’ll get the same capabilities and functions as the original web app.

It won’t just be a replica of your web app, though; Canvas will add the following native features:

You can control your Canvas apps from a simple dashboard — with no code required. The applications will also update automatically as you make modifications to the web app, so all your workflows will be practically identical to what they were before.

It’s more than a tool; it’s a service. Our staff assists with the configuration and build process, and we test, prepare, and submit apps to the App Store and Google Play – guaranteeing approval.

We handle all continuing updates and maintenance after the applications are live, saving you time and money every month for the duration of your subscription.

To convert a Python web app to mobile apps with Canvas is simple. Let’s briefly look at the process.

That’s all there is to it. With Canvas, you can quickly convert a Python web application into mobile apps. You’ll have integrated all of the features and capabilities from your web app and applied them in a new way via a channel with the most effective mobile UX.

You can get your Python app to the iOS and Android platforms efficiently by outsourcing all of the hard work to us, with plans starting at $200/month.

In summary, Canvas is for you if:

Canvas is not for you if:

We hope that this post has been useful in explaining Canvas to you – a viable option for converting a Python web app into mobile apps with all of the important features for less than half the price of traditional development.

If you’d like to learn more about Canvas and how we may help you get live on the App Store and Google Play – book a demo with one of our app experts and receive answers to any queries. For further information, visit the main Canvas page’s FAQ area.

We’re ready to assist you in converting your Python web app to mobile apps right now – all you have to do is book a demo call and get started!

Lorem Ipsum is simply dummy text of the printing and typesetting industry. Lorem Ipsum has been the industry's standard dummy text.